Tolo is a beautiful seaside village in the prefecture of Argolis, built along a long sandy beach
on the coast of the Argolic Gulf. It is close to Athens and currently one of the most popular summer
destinations for Greek and foreign visitors and among the favorite destinations in the Peloponnese for holidays all year round.
It has about 2,500 thousand inhabitants and includes the traditional settlement of Agios Antonios.
The permanent residents, mostly of Cretan descent, are known for their hospitality and are mainly engaged in tourism and fishing. 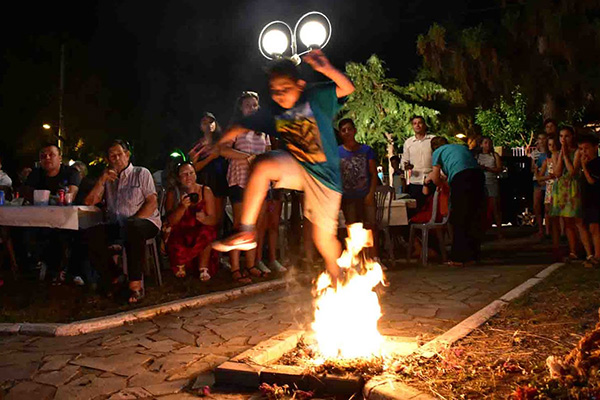 The procession of Epitaphios on Great Friday in the sea is a reference point for Tolo. Also, during the summer months, various cultural events are organized, involving both locals and visitors of the region. The events for the “celebration of the full moon” under the full moon in August and the celebration of “Trata” at the end of September are the most well-known local events.
Also, the custom of Agios Giannis Keidonas, known as «jumping over the flames» on the 24th of June, the last Sunday of the Carnival, various traditional dance events from the dance groups of the region each summer, jet ski races every August and sand-sculpture building are some of the events worth seeing while you enjoy your holidays in Tolo.

References in the region, turning us back to the ancient times of Homer and the epic of Iliad when he wrote about the sea area in front of Assini, in Tolo. The naval power of Agamemnon departed from here to Aulis during the Trojan War. The following centuries, Tolo although uninhabited, is a safe anchorage of conquerors in all periods. The first version of the name is ascribed to one Franc Bishop around 1200 AD, who called it: De l 'eau - Delon (water in french). In 1686, the Venetian group with Vice Admiral Morosini, sailed into the harbor of Tolo from Crete, in order to conquer Ottoman-occupied Nafplio. In this period, the second version of Tolo's name is charged. The Venetians also called it Port d Aulon (harbor of Avlona).
The walls and the church of the Life Giving Spring on top of Daskalio constitute benchmarks of that subsequent era. A small island is hidden behind the island of Tolo, Romvi. A priestly secret school for children of fishermen around Daskalio, operated according to tradition during Ottoman period. The walls and the the chapel of Zoodochos Pigi at the top of Daskalio (a small island hidden behind the island of Tolo, Romvi) constitute benchmarks of that subsequent era. According to the tradition a priestly secret school for fishermen’s children around Daskalio, operated during the Ottoman period. In 1834, by Royal Decree of 1651 13 October on the settlement of the Cretans, Tolo was officially proclaimed as a settlement, called the “Municipality of Minoa” and included the settlements of Iria, Aygo, and Solinari . It is speculated that many of the Cretan settlers were descendants of Morosini. Residents were given per family: 300 drch, 1 ox, farming tools and 30-50 hectares of land.